Copying and saving the original stationery   Changing pictures and background

We began by assembling this piece of stationery. 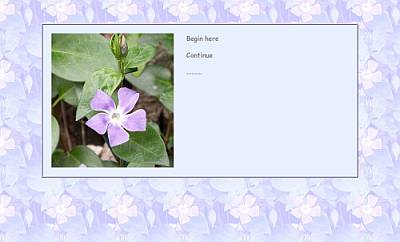 Then, by altering a couple of things, we changed it to this.

How about the text? Does grey go well, or might brown or dark green be better? Might you prefer a different font?

Let's look at the styles.

How to see what you're doing

You'll want to see changes as you make them, so double click the html file to have it open in your browser—in this case, Internet Explorer is best, because Outlook Express is part of IE and they understand each other. (If you have any paths in a piece of stationery, other browsers just won't display it for you properly—but we're not using paths in this stationery.)

You'll also need to have the file open in Notepad at the same time. You'll probably manage this by right clicking and choosing Edit, or by using Send To > Notepad if you have Notepad on your Send To menu.

Each time you make a change in Notepad and save it, switch to IE and hit the Refresh button—or tap F5 on your keyboard.

Don't be afraid to make changes. The more you change things and see the results, the more familiar you'll become with all the different effects you can achieve.

The styles have lots of punctuation—colons and semi-colons, little dots and some curly brackets. Be very careful not to remove any of them accidentally.

The top margin probably doesn't need to be changed, although you could make it 2em for less top space or 4em for more. As a measurement "em" means "the size of an em dash —"

The next line suggests fonts. The rules are: (1.) put the one you really want at the beginning of a little list, but always finish the list with either serif or sans-serif in case the recipient has none of the fonts you name; and, (2.) if the name of the font has two or more words, put quotes around that name. So you might write

Now, .tab1, which is a one-celled table forming a plain area for your typing.   top

"Padding" makes a space between the edge of the table and whatever is inside, so that pictures and text don't touch the border. You can make that narrower if you like: anything down to about 5px.

Borders have color, width and style.

Border width also can be whatever you like. If you want to get rid of the border, change the width to 0px.

Border styles include solid, double, dotted, dashed, inset, outset, groove and ridge. Colours appear different with different border styles and widths, as you'll notice with some of these swatches.

so this part means grey text on an off-white background. In the styles, as well as in html, American spelling is compulsory, so "gray".   top

Some colours can be written as is. They are aqua, black, blue, fuchsia, gray, green, lime, maroon, navy, olive, purple, red, silver, teal, white and yellow. For more subtle colours, you'll need to use some sort help. I find Color Cop very simple and easy to use. Considering the picture we've used, green would probably be good for this stationery. A fairly dark green is #006600. An even darker green is #003300.

Background is the colour behind the text. Without styled stationery, background would be the all-over background colour. In this instance, it's the colour of the writing area.

Always try to have a strong contrast between the text colour and the background colour; the most important thing about an email, on stationery or not, is that it can be easily read.

I felt that with the small yellow tile this combination looked rather nice. 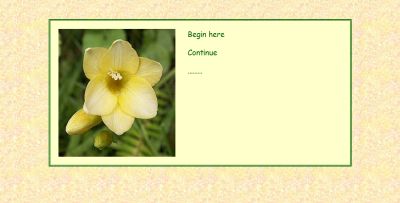 This line describes a paragraph. In html for the web, you wouldn't give a font size in points, but in OE/WM stationery, that's the way it's done.

This is a special arrangement for a picture. It says to move the picture to the left and to allow text to flow to the right of it. There's no need for a margin on the left, since the padding makes a space. The margin on the right is needed, though, so that writing doesn't bump right up against the picture.

If I wanted a picture to be on the right of the text area, I'd write this instead.   top

You could change the 30px margin if you wanted to make the space between picture and text a bit less. Anything under 10px would probably be too narrow.

If your picture is nearly as wide as the writing area, you'll almost certainly want to centre it. If you want to centre a picture, you'd go to this part of the email.

I'd remove the bit that says class="lt" and then put center tags around the whole image tag, like this.

This page gives you a sample to save and assemble.

There are tips here to help you change the picture and the background.

Questions or comments? I’d love to hear from you. My email address is here.

Everything below this is a javascript menu. If you are using a reader,
please use the links here.